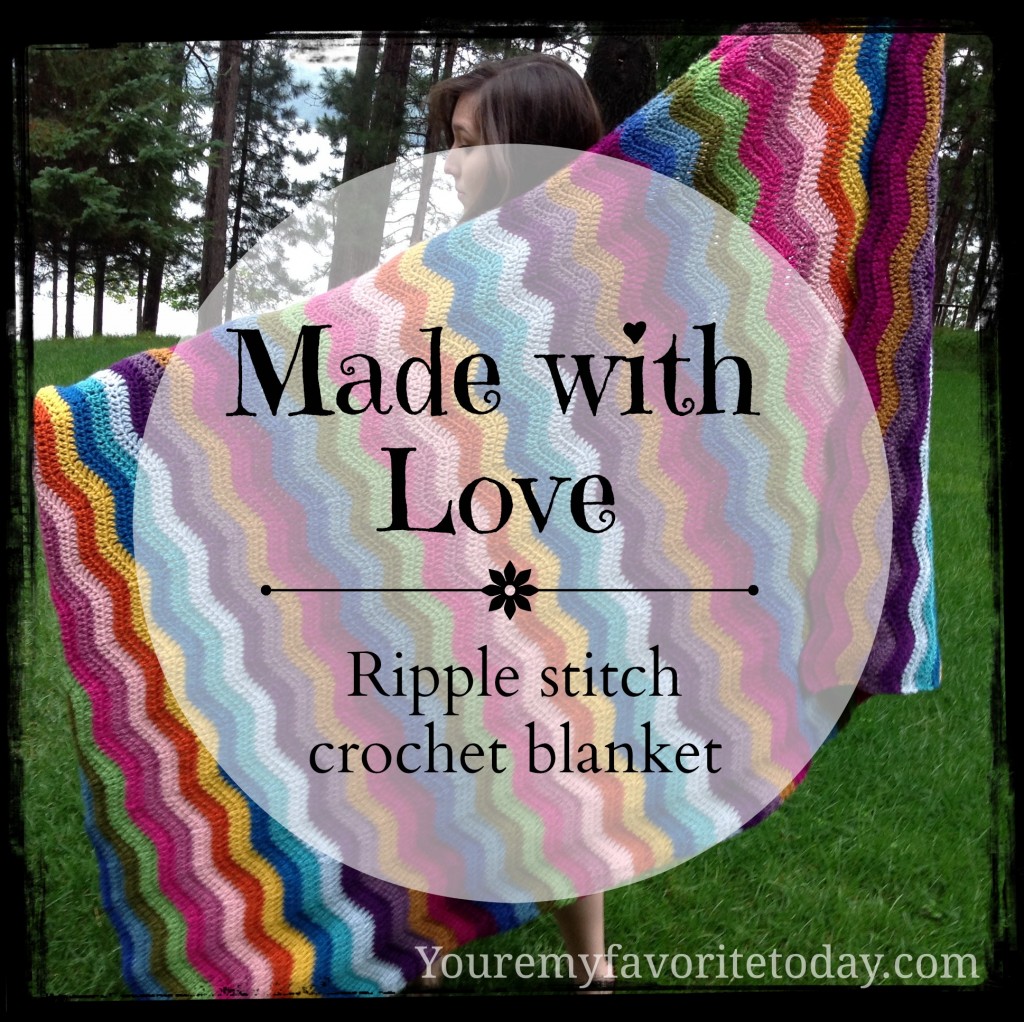 I used to like to think I was crafty.

When my girls were little I’d pull out the old-school, gritty construction paper, felt squares, yarn, googly eyes, and pipe cleaners every now and again for distraction.

Problem was, I was always left with really ugly shit that I had to display proudly on my walls so I didn’t feel guilty, or the entire event ended in tears of frustration because the damn yarn hair wouldn’t stick to the paper.

Hey, I can’t help it if I wanted the homemade paper dolls to look perfect.

As the years went by, I developed a combination of ADD/hoarding as I’d make trips to Michael’s and grab beads for jewelry, buckets of foam stickers, stained-glass window kits, melty beads, decoupage supplies, and at Christmas time, a variety of paint-it-yourself ornaments and kits that always resulted in ugly crap that I now feel obligated to hang on my tree every year.

1. My realization was confirmed — we all sucked at crafts, and
2. I MUST LEARN TO CROCHET.

Hey, I never said I was rational about it all.

In January 2012 — two months before the blog and writing career were born — I was bored, and I’ll admit, even a little disappointed with what I was doing with my life. I mean, when your big excitement of the day is discovering there’s a fresh batch of popcorn at Target, you know it’s time to shake things up. (I’m totally kidding. Two and a half years later, even with all the big, exciting changes in my life, a fresh batch of popcorn at Target is still cause for a happy dance.)

After being completely intoxicated by the colorful crocheted blankets, bags, and other whimsy on Pinterest, I decided that learning a new craft would add interest and excitement to my life! Surely the feat of making an entire blanket by hand would fulfill the lack of personal satisfaction and passion my life was missing!

It was settled: I was going to crochet the hell out of my life.

For weeks, my fingers were cramped, my eyes ached, and my cats became used to hearing me shout words as colorful as the yarn I spent hours practicing the simplest stitches with…which never ever seemed to end up looking like the ones on the videos.

It was literally a gigantic pain.

Long story short, I persevered, and over the past two years have made a few blankets and many, many, many infinity scarves (you are welcome, everyone who has received one…or three).

Since I’ve been writing pretty much full-time for the past year I don’t have a lot of time to work on things, but last winter decided I’d make Thing 1 a fun blanket to take with her to college. 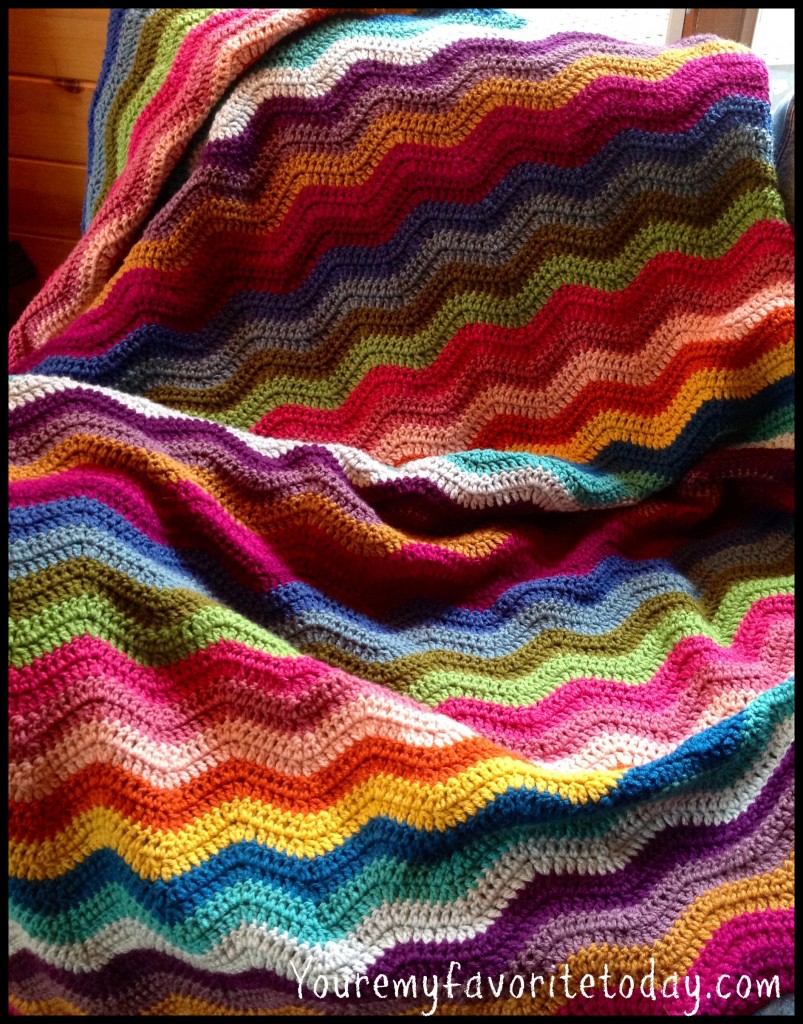 Don’t let the “eight months” part fool you. If I’d have been able to work on it a few times a week, it would only have taken about two months, but since I didn’t work on it at all from March to June, it’s taken a bit longer than necessary.

I am in love with it. 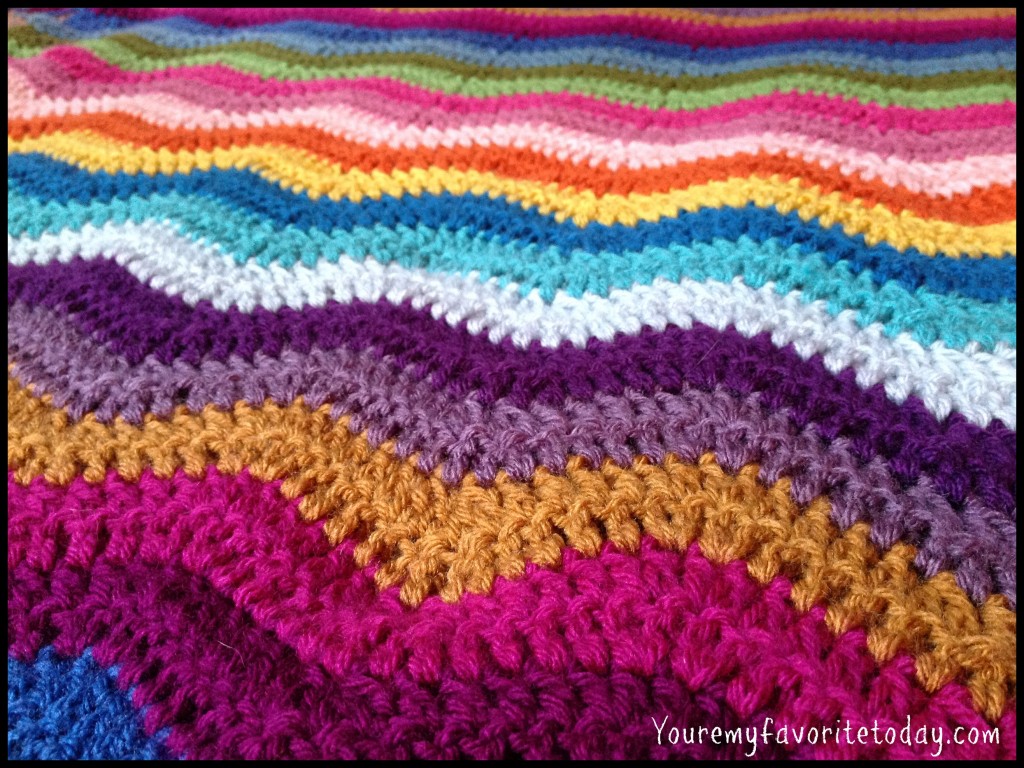 The colors are brilliant. I wish I could take credit for coming up with them, but I used this photo I found on Pinterest for inspiration. 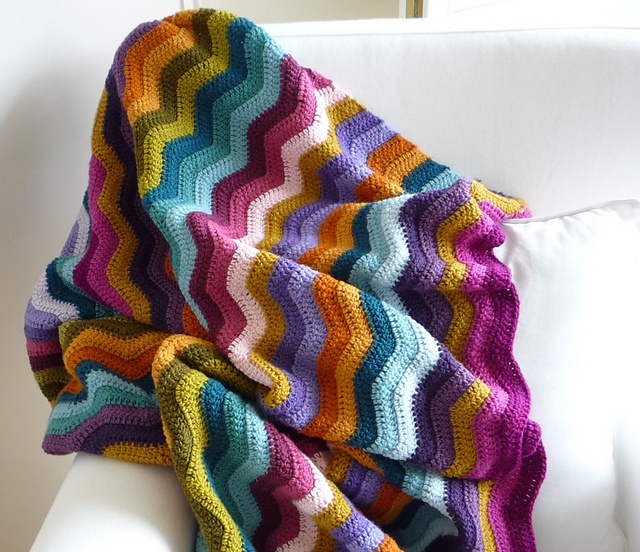 I fell in love with the colors immediately

I tried to match the colors from the photo to the Lion Brand Vanna’s Choice yarns I ordered from JoAnn. They’re super soft, and because they were on sale for $2.99 a skein, I think I even added a color or two. They’re surprisingly similar to the photo. Don’t they make you happy just looking at them? 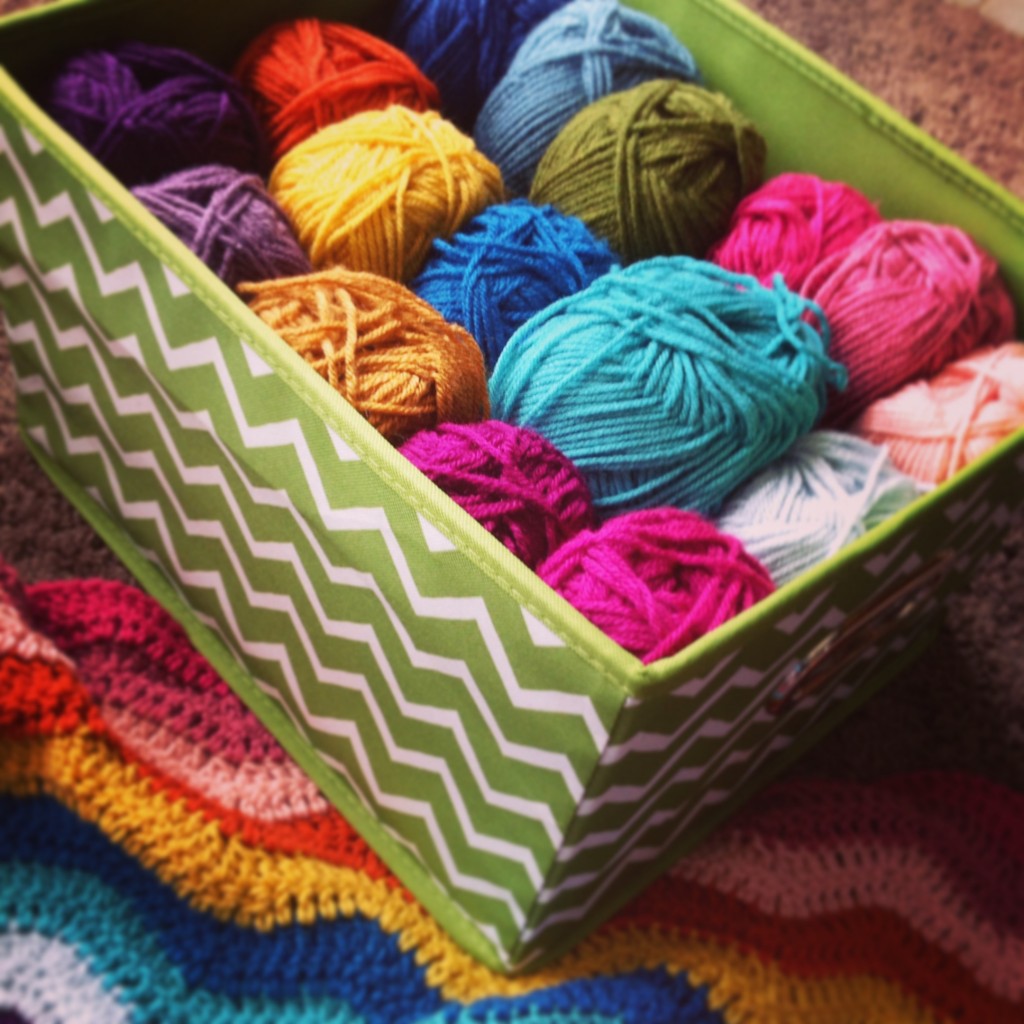 I used 17 colors, and while I don’t know the exact dimensions of the blanket (I’m not that technical) I can tell you I repeated the pattern three complete times, which makes it hang over her toes by about 8″ when pulled up to her chin. So cozy!

The blanket took about one and 2/3 skeins of each color of yarn, so I estimate the blanket only cost me around $70 to make.

As for the construction, I used a simple ripple stitch I found on one of my very favorite crochet sites, Attic24, (and copious amounts of wine, of course). 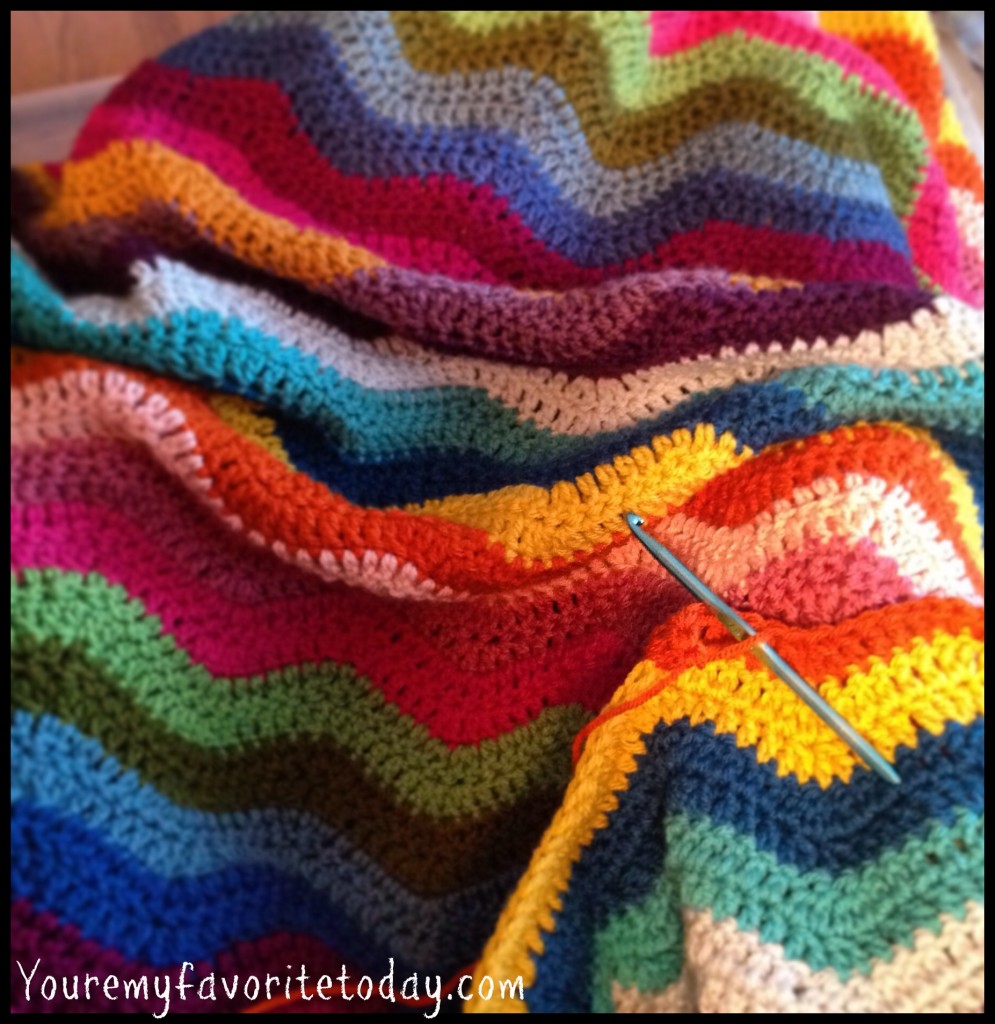 It makes me feel a bit less despondent knowing she’ll be wrapped in love when she’s feeling like she needs a cuddle. 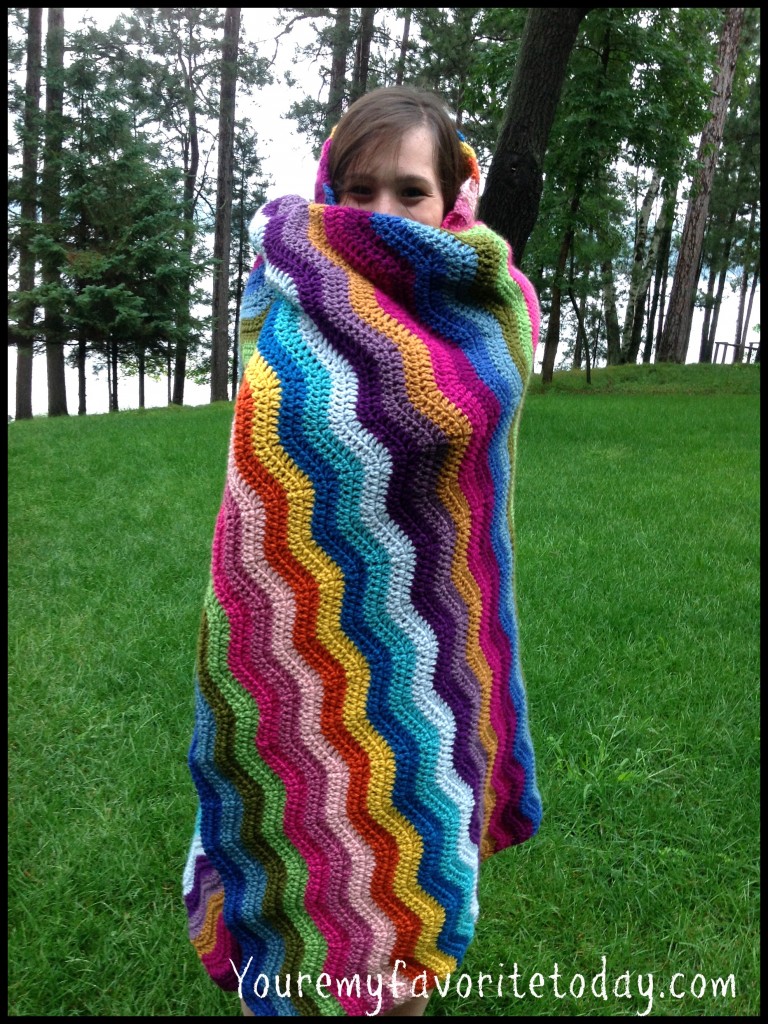 I hope she’ll feel all the love that went into it.

All the glasses of wine? Not so much.

If you’re into crochet, or just like to dream about things you’ll never do,  be sure to follow my crochet board on Pinterest to see the many, many things that catch my eye…but that I will most likely never make.

Share on FacebookShare on PinterestShare on TwitterShare on Email
Posted in Favorites, Senior year/Graduation
← Friday Favorites — Sharing is caringBand-aids, roller coasters, and other thoughts about sending my daughter off to college →